Earlier this week, President Trump’s former attorney Michael Cohen admitted to violating campaign finance law when he payed for porn star Stormy Daniel’s silence regarding an affair she allegedly had with the President. Things only got worse when it became clear that Cohen’s admission was part of a plea deal. In stating his guilt, he directly implicated the President in coordinating the illegal actions. If that wasn’t enough, Cohen’s attorney has strongly implied that they have information that Robert Mueller’s Russia investigation might find interesting. In short, it was a very bad week for the President. And, like many bad weeks, the topic of impeachment is picking up steam– especially among those on the left who are increasingly linking a victory in the midterms to the President’s eventual impeachment.

Trump: You can’t impeach me.

Bu the topic of impeachment is forcing Democratic house candidates to walk a pretty perilous tightrope.

On the one hand, securing the coveted “blue wave” is going to require increased Democratic turnout and riling up the base (or allowing themselves to get riled up) is a good way to make that happen. Studies in political psychology show that emotions are a powerful motivator for political action and, although there is no consensus yet, the evidence up through now suggests that negative emotions like anger, threat, and anxiety are more potent drivers of action than positive ones. So encouraging the base to consider impeachment might translate to increased returns.

On the other hand, the topic of impeachment is generally unpopular with just about everyone who isn’t a Democrat. Republican approval peaked at 20% when Trump was sworn in but has consistently hovered around 10-15% since then. And although more independent voters approve of the idea than disapprove, there hasn’t been a single poll that placed independent support over 50%. 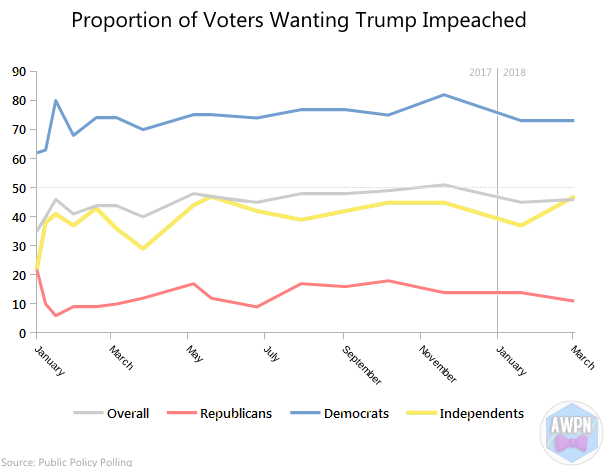 It’s a fools errand for the Democrats to try and convince Republican voters to turn their back on President Trump (it hasn’t happened yet and it won’t happen by November) but it’d also be foolish to energize them by making them feel threatened over losing “their guy.” That’s how you accidentally build a Red Wall to break up the Blue Wave as it prepares to crest. And it’d be even more foolish to isolate the independents by appearing fanatical– especially since a lot of the districts that they’re gunning for this November are tight and thus more sensitive to Independent votes. (Not to mention the fact that impeachment requires 67 votes in the senate and Democrats will have to fight valiantly to hold the seats they have– a few of which are in states President Trump won back in 2016).

This is why you have Democratic leaders, from Nancy Pelosi to Elizabeth Warren, trying to play down talks of impeachment while still trying to paint the President and his administration as corrupt. Indeed, this could very much be why only 1 Democratic congressional candidate is openly in favor of impeachment. They understand that they want to nationalize this election– but not too much. If they ignored Trump entirely, they’d seem spineless and inefficacious. If they make it all about him, and taking him out of office, they appear overzealous and obsessive.

But, as much as party elites try, campaign narratives are never purely top-down. The Democrats are going to have to not dampen the enthusiasm of a base that is ravenously calling for an outcome that they are publicly repudiating.If that seemed complicated reading it, imagine trying to put it into practice for the next couple of months.