Over the last two seasons, the NFL has seen dozens of players kneel or sit down during the national anthem. The movement was initially sparked by 49er’s quarterback Colin Kaepernick. Kaepernick said that he was kneeling to protest police brutality against minority communities. The quarterback’s move sparked outrage by some and praised by others. Soon more players started to follow Kaepernick, and the NFL suddenly had a PR problem. However, the NFL did not change the rule or penalize players for not standing, but on Wednesday everything changed.

Must stand for the anthem

NFL owners have unanimously approved a national anthem policy that will require players to stand or stay in the locker room during the performance. The league will fine players and any other team personnel if they decided to sit or kneel during the anthem.

Teams will also have the option to fine personnel and players. The NFL said that players who kneel are “disrespecting” the flag by not standing. It is a contrast from last year when NFL commissioner Roger Goodell wouldn’t make a such a sharp statement.

The vote was “unanimous” according to Goodell. However, 49ers owner Jed York said he abstained. The new policy will be part of the NFL’s game operations manual and not be part of the collective bargaining agreement. The NFL Player Association is promising to review the policy and “challenge any aspect” that is not in line with the CBA.

Reaction from both sides of the argument has been strong. Jets CEO Christopher Johnson will not discourage players from kneeling. Johnson went as far as saying that if the team gets fined, that is a responsibility he will “bear.”

There seemed to be a split between coaches and some players on the new decision. Vikings coach head coach Mike Zimmer said that he was proud of his team standing all of last year and that he believed everyone should stand anthem.

Safety Malcolm Jenkins, who was outspoken last season, sent out a statement. Jenkins expressed disappoint and promised to continue to fight. 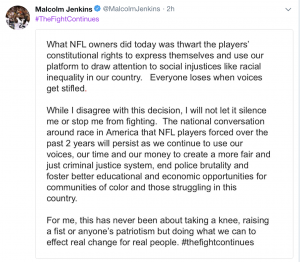 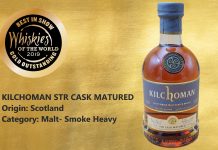 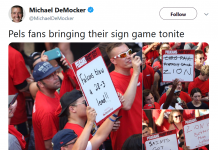 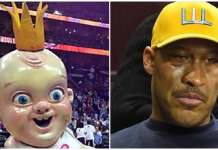