Update 6/14/18: Bourdain body cremated. No indication of an autopsy.

Anthony Bourdain was found dead hanging in his hotel room on Friday, June 8th by his close friend and fellow celebrity chef Eric Ripert. It was quickly determined to be a suicide.

He has after all, on several occasions openly contemplated suicide.

“There have been times, honestly, in my life that I figured, ‘I’ve had a good run — why not just do this stupid thing, this selfish thing… jump off a cliff into water of indeterminate depth,'” Bourdain told People Magazine.

Yet in this same interview, he spoke of his young daughter, who revived his passion for life:

“… in retrospect, I don’t know that I would do that today — now that I’m a dad or reasonably happy.”

Prosecutor Christian de Rocquigny, quoted by the New York Times, said that Bourdain’s behavior in the days leading up to his death,“ leads us to suspect that not much preparation and premeditation went into the act, and leads us more in the direction of an impulsive act.”

Despite having documented battles in the past with heroin and crack cocaine, when asked about toxicology testing, de Rocquiqny said, “This is solely to give the family more information about the motivations and the cause of death. We have no indication that he was consuming alcohol the days before his death or changed his behavior.”

“The case is closed. There is no indication of any involvement by a third person, and we’re ready to give the body to his family.”

This is why I decided to investigate this for myself instead of just jumping on the media bandwagon. Case closed. No reason to investigate any further. Waste of time to test a former heroin and crack cocaine addict to see if he was under any kind of influence when he spontaneously decided to hang himself. Ruled a suicide and broadcasted to the world within hours before any kind of investigation or autopsy was even performed?

“He is absolutely the last person in the world I would have ever dreamed would do something like this,” his mother Gladys Bourdain, who was an editor at the Times for years, told the newspaper.

Bourdain was a prominent voice in the #MeToo movement.

“I came out of a brutal, oppressive business that was historically unfriendly to women,” Bourdain said on an episode of The Daily Show in January. “I’d like to say that I was only enlightened in some way or I’m an activist or virtuous, but in fact, I have to be honest with myself. I met one extraordinary woman with an extraordinary and painful story, who introduced me to a lot of other women with extraordinary stories and suddenly it was personal.”

His girlfriend, Italian actress Asia Argento, is one of the dozens of women who accused Weinstein of sexual assault, harassment or rape after he was exposed in an October New Yorker article. Three weeks ago, he tweeted a story about a powerful speech Argento delivered at the Cannes Film Festival about Weinstein, calling it an “absolutely fearless off-script nuclear bomb of a speech to a stunned crowd at #Cannes.”

Other people have also died in the exact same way when trying to expose child sex trafficking in Hollywood.

He Was An Outspoken Critic of Dictators

Bourdain was an outspoken critic of dictators, including Vladimir Putin, for years. In 2013 he interviewed Russian dissident Boris Nemtsov, who was murdered in 2015. https://t.co/Ajn2kyMQDm pic.twitter.com/yuXBVw8Kn8

In 2001, in his book, A Cook’s Tour: In Search of the Perfect Meal, Bourdain wrote after a trip to Cambodia: “Once you’ve been to Cambodia, you’ll never stop wanting to beat Henry Kissinger to death with your bare hands. You will never again be able to open a newspaper and read about that treacherous, prevaricating, murderous scumbag sitting down for a nice chat with Charlie Rose or attending some black-tie affair for a new glossy magazine without choking.”

Henry Kissinger was the one who invented the Gulf of Tonkin Incident that propelled us into Vietnam.

Last year, Bourdain joked that if he had the chance to cook for Trump and North Korean leader Kim Jong-un, he’d probably poison them.

… And Then There’s Hillary Clinton

.. and I am in no way an HRC fan. I’ve been on the receiving end of her operatives’ wrath. And it ain’t fun, 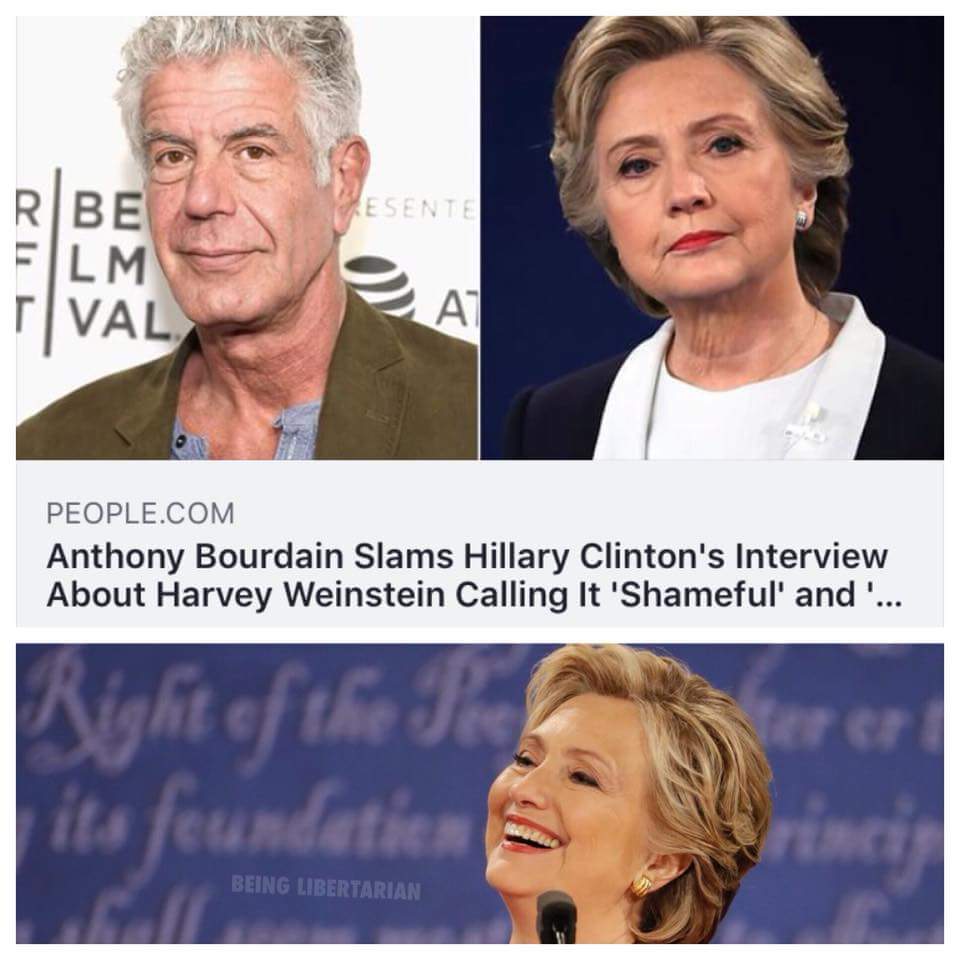 Yet another mysterious suicide that seems to carry the stench of a Clinton.

Snopes, who many see has a solid source of information adamantly declares that they proved 20 years ago in no way shape or form are these sketchy “suicides” connected to the Clintons.

I’ve done my research and the number of deaths connected to the Clintons is staggering. It’s honestly so easy to research I knew Snopes was somehow compromised.

Forbes contributor Kalev Leetaru discovered that Snopes has zero transparency over how they work internally.

We basically have no idea who is actually doing the fact checking within Snopes.

He states there could be for example ” … an anti-climate change Republican serving as a fact checker for climate change stories at Snopes and flagging every article about a new scientific study on climate change as fake news.”

It also means every fact checker could potentially be a lobbyist that represents a corporation.

Snopes was quick to “debunk” a blog post from Neon Nettle that delved into how Bourdain was about to expose an elite pedophile ring.

The Inspector General’s report has confirmed that Hillary Clinton helped run a D.C child sex ring during her time as Secretary of State.

Buried on page 294 of the 500-page report were notes from FBI Agent Coleman, who discovered evidence of “crimes against children” by Hillary Clinton and her Foundation.

Was this what Bourdain knew and they tried to stop?

Bourdain aided in the exposure and arrest of Harvey Weinstein, was a powerful voice for the #metoo movement, openly condemned other world leaders, was outspoken against Trump, Kim Jong-un, and Hillary Clinton, hinted at being harassed by her operatives, whose death was immediately ruled suicide and spammed across several mainstream media outlets with no investigation or autopsy, and was possibly about to expose yet another elite pedophile ring.

You tell me, are these just all coincidences, complete fabricated lies, or could this be yet another activist silenced for trying to expose the corruption that has been festering beneath our feet?